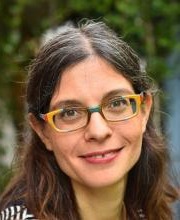 I am studying the intellectual and religious culture of the high Middle Ages, in search for ideas and modes of thought different from mine. In particular, I am attracted by the way medieval theologians attempted to provide rational explanations for Christian doctrinal issues, magic and the supernatural. This year I have completed a book addressing the way 13th century Parisian theologians analyzed altered states of consciousness, and in their discussions I find a continuous search for their own self definition as new knowledge agents in European society, among other "knowers of God": believers, philosophers and prophets. My current project delves into cognitive practices of medieval students, and especially visual thought. I spend, therefore, a lot of time looking for and looking at medieval manuscripts searching for personal notes and diagrams. I am fond of placing intellectual and scientific texts in the vibrant context of medieval universities, monasteries, politics, literature, architecture and music. The people of the high Middle Ages continue to surprise me with their vigor and originality, from writing highly complex  scholastic works, to intricate polyphinic music and cathedrals, from religious activism to chivalry.

I teach courses on monastic movements, heresies, perceptions of the supernatural, altered states of consciousness, medieval knowledge, the year 1215 and medieval Paris.